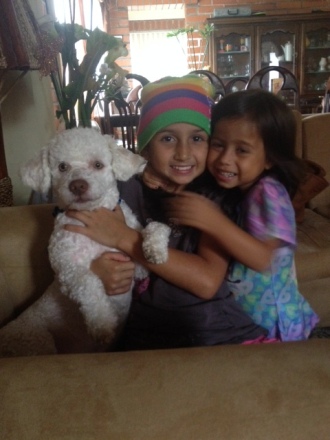 Well this week literally went to the dogs!  It started this past Sunday with a lost dog.  Spike, a deeply cherished family member (Guido’s sister’s dog) was lost in a city of nearly 500,000 people over three hours away and no one really knows how long the dog had been missing.  The situation was grim and did not offer much hope.  But God literally led us to the dog 3 hours away and we were able to get him home again.  And wouldn’t ya know it, the people who had found him and taken very good care of him for over two weeks, actually called him Spike without knowing that it was his real name!!

Back at the camp things were as usual.  School with the kids, lots o

f chats with the c

amp workers, midweek bible study, all normal.  And then Friday morning the late night noises of the night before became all too clear when we found all three of the camp dogs crying in pain and remorse!

They had obviously killed and attempted to eat a porcupine.  Our morning was spent tending to the dogs and tediously pulling out quills one by one.

And then Ana (our cook and dear friend) shows up with yet another dog that was in need of “temporary” housing.  A puppy.  A cute and adorable puppy that was gifted to Ana but her other two dogs will not accept him and he has the little  bloody patches on his face to show it.  So now we find ourselves

looking for a family to take and to love the little puppy QUICKLY before he gets anymore settled in!!

This has been our week on the mission field.  Nothing deeply spiritual, although finding Spike was very much God led and blessed.  Now, as I sit and work on this post, I am watching from the window as a group of 45 Quichua Indians enjoy a leadership workshop and retreat time here at the camp.  Our job this weekend is to simply serve them.  Again, nothing deeply spiritual or moving.  Yet, I am reminded that it is the little things.  It is in the daily menial tasks that God uses to build into us.  Luke 16:10a Whoever can be trusted with very little can also be trusted with much.

Oh that we would be faithful in the daily!

One thought on “Gone to the Dogs!”